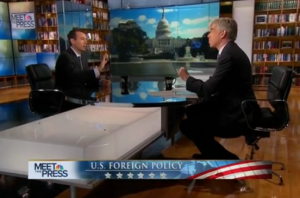 On this week’s Meet the Press, David Gregory sat down with Obama adviser David Plouffe to discuss the aftermath of the Libya attack — and particularly the White House’s handling of the situation. Challenged about the president’s changing response and questioned about possible intelligence failure, Plouffe was on the defensive, maintaining there was no wrongdoing.

The suggestion that the White House would withhold information about the situation for political reasons is “preposterous and really offensive,” Plouffe said. The response was based on changing/updating information.

“Was this an intelligence failure?” Gregory asked.

“No,” Plouffe replied. Calling it a “complex event,” he added, “As determinations were made, that was shared with the American people.” The focus should be on ensuring security of American personnel going forward, he said.

Gregory then mentioned the call for the resignation of U.S. Ambassador to the United Nations Susan Rice. Asked whether the president has “100 percent confidence” in Rice, Plouffe said, “Absolutely.”

Then, looking at the broader point, Gregory asked, “What is America doing to work its will to change the trajectory in Libya?” Plouffe emphasized enhanced security for personnel going forward — declining to comment on any potential military options.

“But apparently not,” Gregory responded, rather bluntly — pointing to Obama’s appearance on the The View while not meeting with world leaders during the UN General Assembly’s New York agenda. He went on to challenge Plouffe on the president’s decision, particularly in light of the precarious situation in the Middle East and Israel’s concerns about Iran.

Plouffe noted the president’s “constant contact” with world leaders. Obama’s fulfilled his foreign policy promises, he said — then knocking Romney’s “half-baked” statement in response to the Libya attack. Gregory reminded him that the White House, too, had to deal with the controversy over the embassy’s statement, which “some might also call half-baked.”