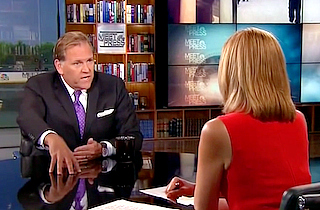 Hawks like Senator Lindsey Graham (R-SC) and others have been warning for weeks that ISIS, the band of Sunni militants currently marauding across Iraq, have designs to strike the United States, possibly in a 9/11-level attack. On Meet the Press Sunday morning, guest host Chris Jansing asked outgoing House Intelligence Chair Mike Rogers (R-MI) if there was any actual intelligence to support that claim.

“We’ve heard the Pentagon say right now they are not in a position to launch an attack on the United States,” Jansing said. “Is there any intelligence that ISIS is planning that or has the capability to do it?”

Rogers disputed the Pentagon’s conclusion. “The very fight between al Qaeda that allowed ISIS to separate from al Qaeda in Syria was the fact they wanted to conduct western-style operations,” as opposed to focusing on Syria, Rogers said.

“We have a lot of people that have passports that could go to Europe and then to the United States without a visa waiver, meaning, they would want haven’t have to apply for a visa,” he said. “The only way we would know was by looking at who was riding on those airplanes. That might not be enough.”

“If that’s a British citizen [in the videotaped execution of James Foley], we believe it was, you have somebody that was watching and participating in the whole exercise of making that video,” Rogers continued. “That individual goes back home, buys one plane ticket, they’re in the United States. We may or may not know who that individual is. That’s what’s so dangerous about this, and why we can’t let them continue unabated.”