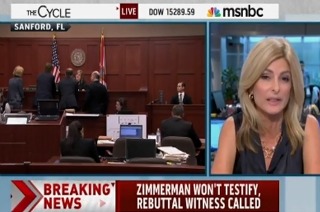 As the trial of George Zimmerman for the murder of Trayvon Martin enters the closing phase, NBC News legal analyst Lisa Bloom recommended that the prosecution focus extensively on the racial element of the case. She said that proceedings thus far have been clinical and have avoided dwelling on the implication that Zimmerman’s racial profiling of Martin led to their fatal confrontation. Bloom advised the prosecution to focus heavily on the racial angle in summation.

“In your closing argument, you’re allowed to make argument,” observed criminal defense attorney Seema Iyer. She said that the prosecution may want to introduce the notion that Zimmerman’s bias led him to confront Martin which ultimately led to the fatal escalation.

“What is wrong with that?” she continued. “What is wrong which bringing in race, culture, politics into your summation? you tell the jury when they are picked, ‘use your common sense, life experience.’ Go for it.”

Bloom agreed with Iyer’s recommendation for the prosecution.

“You know, this case, from the beginning, got a groundswell of public support because of the racial angle, and yet we have heard relatively little about it in the courtroom,” she observed. “What we have heard is that — 100 percent of the time — that George Zimmerman called police about a suspicious person in the neighborhood, it was because of an African-American male.”

She added that one defense witness testified that there had been one burglary in Zimmerman’s neighborhood and the perpetrator was a black male.

“Does that give George Zimmerman the right to call the police anytime someone’s walking while black in the neighborhood?” Bloom asked. “I don’t think so.”

She advised the prosecution in the case to focus extensively on the racial angle of the case against Zimmerman in their closing arguments.