NBC’s Lisa Myers: Most ‘Believe This Prosecution [Of John Edwards] Is A Waste Of Taxpayer Money’
video

NBC’s Lisa Myers: Most ‘Believe This Prosecution [Of John Edwards] Is A Waste Of Taxpayer Money’ 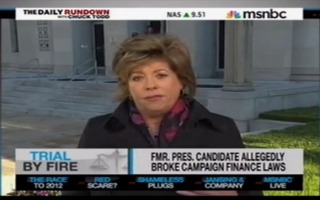 NBC News reporter Lisa Myers told MSNBC’s Luke Russert, fill-in host for Chuck Todd on The Day Rundown, that the trial of former North Carolina Sen. John Edwards is viewed as a waste of money by most residents of the Tar Heel State. She cited a Public Policy Polling survey to conclude that while most North Carolinians “already have concluded that he committed a crime here,” they also “believe this prosecution is a waste of taxpayer money.”

“This trial marks the final chapter in an astonishing fall from grace,” Myers began. “Basically today and over the next ten days, prosecutors and the Edwards defense team will be battling over selecting a jury of 12 jurors and 4 alternates. All 16 of them will hear this case.”

“Finding an impartial jury is going to be tough because public opinion down here is brutal,” said Myers. “A new survey out today finds that most North Carolinians have a highly negative opinion of John Edwards and a majority of them already have concluded that he committed a crime here.”

“The only glimmer of hope in this survey for the Edwards defense team is that the public also does seem to have some doubts about the merits of this case,” Myers continued. “In fact, most said they believe this prosecution is a waste of taxpayer money.”

“The Edwards defense here is going to be, yes he is a terrible husband but he is not a crook,” Myers concluded.

Edwards, a former Democratic presidential candidate and vice presidential nominee as well as a U.S. senator representing North Carolina, is accused of using more than $900,000 in illegal campaign funds from two wealthy donors to hide his pregnant mistress during the 2008 presidential campaign.

Watch the report below via MSNBC: