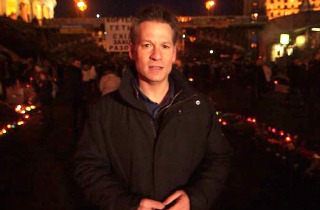 Engle took to Twitter after his release where he said that he is safe and that he was to be “deported” back to Ukraine.

Detained by pro russian militia in crimea. Questioned for an hour or so. Not allowed to move or phone. Then released. #ukraine

militiamen first told us we'd be deported "back to #ukraine". Eventually we talked them out of it. they let us go. #crimea.

In December, 2012, Engel was captured and detained by anti-government forces in Syria while reporting on the ongoing civil war in that country. Following a firefight in which two of Engel’s captors were killed, Engel was safely released after spending several days in captivity.