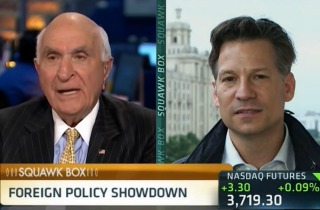 On Thursday, NBC News’ award-winning foreign correspondent Richard Engel was pressed by Home Depot founder Kenneth Langone to “name one country” with which the United States has better relations today than it did when President Barack Obama and former Secretary of State Hillary Clinton took office in 2009. Engel noted the increasing number of nations with which the U.S. has worse relations, but said he was “hard pressed” to identify a relationship which has improved.

“I think you’d be hard pressed to find that,” Engle said after noting that bilateral relations with most European countries “have gotten worse.”

RELATED: Ronan Farrow Rips Obama’s Foreign Policy Approach: Getting ‘Others to Do the Dirty Work’

“And I think the reason is our allies have become confused,” Engel continued.

“For eight years, you had the Bush administration with a very interventionist policy,” he continued. “That was very unpopular with most of our allies, but toward the end, after eight years, people adjusted to it.”

“Now you have a presidency that, after six years, is pulling out very rapidly,” Engel continued. “And that is creating a kind of a pump-action, a vortex of instability.”

“Right now we have a black hole in Syria. Iraq is in a state of collapse. Libya is about to go back into a civil war,” Engel concluded. “So, I think there is a lot of – a lot of problems on the horizon in the foreign policy world, just because you are off-ramping in Afghanistan.”