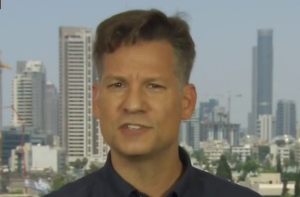 NBC chief foreign correspondent Richard Engel said on MSNBC’s Morning Joe that it was “very possible” the Iran deal would embolden ISIS and set off a Middle East arms race.

“There’s a lot of anger here,” he said, reporting from Tel Aviv. “And not just in Israel. In many capitals in the Arab world, there is deep distrust with this agreement. Basically, the Arab world and Israel, both do not think that Iran will abide by the deal, that they will cheat…”

MSNBC contributor Mike Barnicle asked Engel whether “this agreement could set off a new and really volatile Mideast arms race,” to which the reporter responded that it was “very possible.”

“In one sense you have to look at this as a gamble,” he said, “The U.S. is taking a gamble, and for the U.S. there’s relatively low risk. The U.S. is far away… so for the U.S. it’s a gamble with very, let’s say, acceptable downside.

“There is a possibility that this agreement could just be adding more fuel to the sectarian fire,” Engel warned, “that it will embolden groups like ISIS, which will now see Iran and the U.S. in collusion, that it will cause Saudi Arabia to become more nervous that it’s being surrounded by Iranian expansionism. So an arms race is possible and a worsening of the active regional conflicts in the region is also possible.”