Neil Cavuto Defends Media From The Wrath Of Newt: ‘Not Doing Anyone A Favor’
video

Neil Cavuto Defends Media From The Wrath Of Newt: ‘Not Doing Anyone A Favor’ 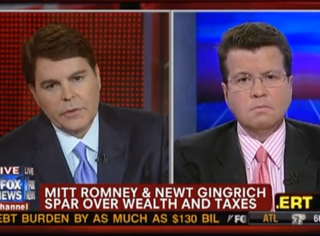 Newt Gingrich came out this week swinging at the media this week, from Juan Williams to John King to the crew at Fox & Friends this morning, and it seems to be paying off in spades in South Carolina. On Fox News today, Neil Cavuto— who defended King— commented on the Fox & Friends assault, and found the tactic effective as it is worrisome. “You’re not really doing anyone a favor,” he told Gregg Jarrett, “except throwing a bone at a crowd that likes red meat.”

Jarrett noted that Gingrich had gone off on Fox & Friends, “excoriat[ing] them for a simple question.” “What do you make of Gingrich’s tactic here?” he asked. To which Cavuto responded that “there’s no doubt that it is working,” noting that he speaks from first-hand experience with Gingrich. He also added that the presumed ideology of the target media person doesn’t seem to matter, as long as they are considered “mainstream media,” and this is precisely what happened to King.

“There was an elephant in the room, John King was raising an issue that was germane,” he noted, because of the Republican Party’s past attacks in this area. “If the Republican Party is going to make a big deal over private issues, as is a fair thing to do, and it certainly did so with Bill Clinton, we have to be consistent on this,” he argued. He added that journalists had “a responsibility to dismiss the rage of an ex,” but the story was in the public sphere and thus fair. He concluded that Gingrich’s responses don’t seem to help anyone, as there was a way to “bat it away without batting me for raising it” or “saying it is stupid for me to bring it up.”