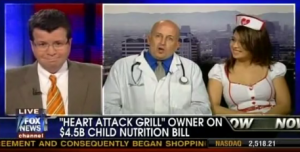 As Michelle Obama tries to get her child nutrition bill passed, Neil Cavuto tackled opposition to the new law by interviewing fake doctor/restauranteur Jon Basso, of the Heart Attack Grill, who made some strong points about America possibly losing its “ethnic identity” by restricting its fatty foods. Of course, many of these strong points were probably lost on most viewers who were distracted by the fact that Basso was accompanied by a waitress dressed like a sexy nurse.

The entire thing was about as hilariously ridiculous as you can get. Cavuto was clearly having a good time, but it was unclear whether or not Basso was being serious. He was either giving a terrifically dry performance, or he’s greatly overestimating how seriously someone can be taken while they sit next to a sexy nurse. If it’s the former, God bless him. If it’s the latter, God really bless him.

The entire time, Cavuto seemed to be on the verge of a giggling fit, especially when he grilled “Nurse Mary” on her opinion of the health care bill. The waitress seemed a little surprised that she was expected to say more than her totally-not-pre-planned earlier response that “The government that governs least, governs best.” That’s ok. A quick (yet unsuccessful, I fear) search on the internet to see how to spell her last name has located her MySpace page where she has plenty to say. She’s a good singer too!

At the end of the segment, Cavuto cuts to the quick of it by pointing out that, whatever happens to the bill, Basso’s just happy for the publicity. Sure, that may be true, but I’m just happy for this segment. God bless America.

Check out the clip from Fox News as well as an amazing commercial for the restaurant below: