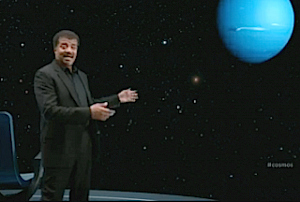 Astrophysicist Neil deGrasse Tyson continues to challenge long-held religious beliefs on his weekly prime time science show on Fox, Cosmos: A Spacetime Odyssey. At the beginning of Sunday’s episode, Tyson offered up a compellingly straight-forward reason why the Earth cannot possibly be 6,500 years old, as creationists believe it to be.

As Tyson explained to his viewers, we measure Earth’s distance from other planets and galaxies in the universe by the speed of light. On average, Neptune is four light-hours away from Earth, meaning the Neptune we see when we look through a telescope is as it appears four hours ago.

For another example, Tyson looked at the Crab Nebula, a supernova remnant that just happens to be 6,500 light-years away from Earth. This means that when we view the Crab Nebula through the telescope, we are seeing it 6,500 years in the past. Because there are objects beyond that point, we can see with our own telescope-enabled eyes that the universe is older than 6,500 years.

“If the universe were only 6,500 years old, how could we see the light from anything more distant than the Crab Nebula?” Tyson asks. “We couldn’t. There wouldn’t have been enough time for the light to get to Earth from anywhere farther away than 6,500 light-years in any direction. That’s just enough time for light to travel through a tiny portion of our Milky Way galaxy.”

“To believe in a universe as young as 6 or 7,000 years old is to extinguish the light from most of the galaxy,” he continues. “Not to mention the light from all the hundred billion other galaxies in the observable universe.”

If the existence of million-year-old fossils doesn’t do it for you, maybe this will do the trick.