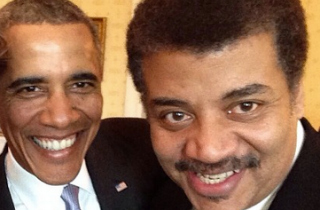 In an interview with Grantland, pop scientist Neil deGrasse Tyson reveals that his production crew did not approach President Obama to introduce the first episode of the Cosmos reboot earlier this year. Instead, Tyson said, the president’s camp made the request, perhaps in an attempt to win back support from some in the science community.

Asked by Rembert Browne what the process was for securing the president’s introductory remarks, Tyson explained:

That was their choice. We didn’t ask them. We didn’t have anything to say about it. They asked us, “Do you mind if we intro your show?” Can’t say no to the president. So he did. He may have been riding the very high media attention that Cosmos had been getting on the ramp-up. Because it was airing in prime time on a network…

Tyson and his interview agreed the remarks constituted a “good look” for the president, and were thus to his advantage:

Because it was airing in prime time on a network, reporters that normally covered television entertainment and not television documentaries were tasked with covering Cosmos. It was on their beat, the Fox lineup on a Sunday night. So the media attention ended up reaching not only the traditional people that would talk about a documentary, but entertainment reporters. The geek blogosphere was abuzz, and also people who were curious, fans of the original series, and were curious what would happen for it being on Fox. What does it mean that Seth MacFarlane, who’s best known for his fart jokes — what does it mean that he’s executive producing? There were a lot of people who had some anxieties about that and were eager to learn what would unfold.

The Cosmos host also suggested that the president’s introduction may have been a gestural nod to the science community shortly after his budget reduced spending for aeronautics research and space flight:

That same week, by the way, Obama — the White House — released its budget, which included a reduction in the science spending in NASA. So if you look at it politically, rather than gesturally, it’s easy to think of that as a way for him to try to gain points back in the science community, immediately after dropping the science budget for NASA.

Here’s the video of that introduction: