Netanyahu: Hamas Wants Civilian Casualties to Use as ‘PR Fodder’ 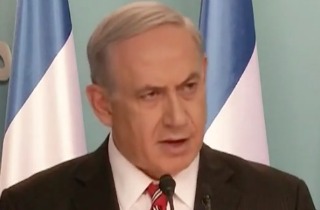 Israeli Prime Minister Benjamin Netanyahu spoke today on the current Gaza conflict. He spoke remorsefully about the deaths of civilians in Gaza––telling the assembled reporters that Israel regrets all these civilian casualties––but insisted that casualties are exactly what Hamas wants so they can prop up the dead bodies in the name of their own public relations.

Netanyahu emphasized, “The people of Gaza are not our enemy. Our enemy is Hamas.”

He said Israel has “taken extraordinary circumstances and measures to avoid civilian casualties,” whereas Hamas actually wants such casualties.

The prime minister also condemned those who would supports Israel’s right to defend itself but would “refuse to… let Israel recognize that right.” He said it would be a “moral mistake” that would only serve to help Hamas.