Netanyahu Talks Hamas With Hannity: ‘Can’t Negotiate With People Who Want To Kill You’ 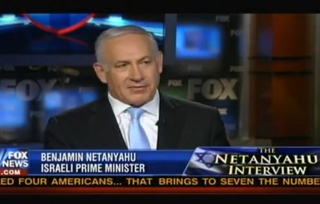 Israeli Prime Minister Benjamin Netanyahu has made it his goal to take America by storm during a visit that began with President Obama requesting Israel consider a return to 1967 borders. After an eventful speech earlier today, the Prime Minister sat down with Sean Hannity and made it clear he had no intention of backing down on his nation’s borders, asserting: “a peace you can’t defend is a peace that will not hold.”

Netanyahu expressed no hesitation in declaring that he had no intention of returning to said borders. “Imagine America condensed to half the Beltway,” he told Hannity, saying that he would not reduce his nation to a size that would be indefensible militarily. “In our part of the world there is a simple truth,” he noted, “a peace you can’t defend is a peace that will not hold.” Despite that, however, he emphasized that the press had overstated his disagreement with the President: “the press loves to take differences and blow them up, it’s very attractive.”

As for peace in his region, he did not see a solution so long as Palestine recognized Hamas, who he defined as “a criminal organization committed to our destruction saying they have a holy mandate to kill Jews everywhere.” Bottom line for Netanyahu: “you can’t negotiate with people who want to kill you,” also making the parallel between America and Al-Qaeda sitting down for talks– “this is ridiculous.” He also noted that peace would not be imposed from the outside, including the UN and its “outrageous resolutions,” joking, “the UN could decide that the sun revolved around the earth and that both are flat disks. They could actually do that.”

But Netanyahu was not completely combative, noting that he had said he would recognize a Palestinian state, which is a big deal because “we are talking about parts of our homeland.” “I said it,” he argued, “so what president Abbas has to do before his people what I did before my people… if you want peace, say it.”

The first half of Hannity’s talk with the Israeli Prime Minister below: