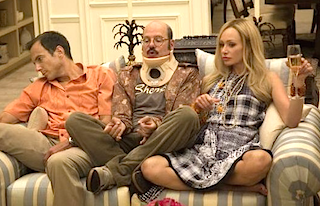 The fourth season of Arrested Development, which premiered all at once on Netflix last year, may not have been the most beloved of the series, but that doesn’t mean it’s the end of the road for the Bluth family. In an interview with USA Today this week, Netflix’s chief content officer Ted Sarandos said a fifth season of the show is “just a matter of when.”

More than seven years elapsed between the end of season three on Fox in 2006 and the eventual revival of the show on Netflix in 2013. The major obstacle in getting the show up and running again was scheduling conflicts for the show’s actors, who gained popularity in the intervening years.

The inability to get all nine leads together at the same time led to one of the major criticisms of season four, something Sarandos acknowledges. He called it a “fair criticism” of the show’s Netflix season “that the cast didn’t appear on screen often enough together.” Presumably, when the show does return, creator Mitchell Hurwitz will address this issue.

You can watch the season four trailer below, via Netflix: