Never Mind The House – The Senate Has Become More Conservative 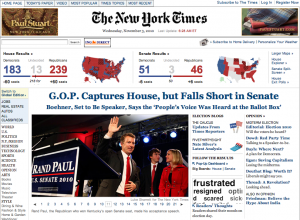 Joe Scarborough makes the point early on Morning Joe: “We’re all talking about the House right now – it is the Senate that has become more conservative, by so many degrees.”

The Democrats lost the House by a huge flip — Nate Silver called it at 243 seats, with a net gain of 65 for the GOP, in the biggest flip from one side to the other since 1948.

But as Scarborough points out, even though the headline is that the Dems get to hold the Senate — though certainly not that hard-won Senate majority (remember that?), the overall tone of the Senate has shifted right. Scarborough pointed out that West Virginia’s Joe Manchin was hardly a victory for the left, considering he basically ran as a conservative: “When you look at Manchin as the bright spot — and all these very conservative Republicans who won,” said Scarborough, it seemed clear that the Senate had shifted right, despite, as Silver pointed out, the Dems being “able to leg out a couple more wins than expected in the Senate.”

At this point even a victory for Lisa Murkowski, trending for the Alaska Senate, is being perceived as a victory for the left (and certainly against the Tea Party) — but Murkowski originally ran for the Republican nomination. There’s Rand Paul in Kentucky — the classic fringe-y Tea Party candidate — and Marco Rubio in Florida — the mainstream Tea Partier, who challenged Charlie Crist as a classic Republican with classic GOP bona fides — both backed by Jim DeMint, who reached out to the Tea Party from within the GOP machine early on, finding a new base of power there. The defeats of Sharron Angle in Nevada and Christine O’Donnell in Delaware speak to the fact that the fringes still face an uphill battle, but especially with respect to Angle, look how close they got.

But look at who was re-elected: North Carolina arch-conservative Richard Burr, who, as Mary Curtis of Politics Daily notes, “sided with the Republican leadership 94 percent of the time,” voted against health care and the stimulus, and has “voted to restrict access to abortion and against repealing the military’s “don’t ask, don’t tell” policy on gays.” (Speaking of “Don’t Ask, Don’t Tell” its chances of being repealed just dropped considerably.) Meanwhile, there’s this headline: “Sen. Russ Feingold, liberal icon, loses seat in Wisconsin.” Fare thee well, Russ Feingold. You wouldn’t really fit in, anyway.

Still with all the focus going to the flip in the House — and the replacement of Speaker Nancy Pelosi with John Boehner — the Senate should not be overlooked as yet another obstacle that President Barack Obama will have to face going forward. The headline right now is “Republicans Take The House, Dems Keep The Senate” but upon closer inspection the lede may be buried indeed. I will leave the last word to Nate Silver: “I’m not trying to be a media critic here, but Republicans have some legitimate gripe with portrayals of the night as having been a split decision.”