New Documentary Claims Hitler Died In 1965, Did Not Commit Suicide After WWII 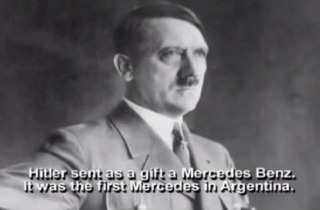 According to director/producer Noam Shalev and researcher Pablo Weschler, Adolf Hitler lived out his last days in an luxurious Argentinian hotel, instead of committing suicide in a Berlin bunker as previously thought. Their new documentary, Hitler in Argentina, attempts to make their case and is set to be released next year.

Shalev doesn’t claim to be 100 percent certain about his theory. “We will never know the truth,” he says. “But there is enough evidence to build an alternative theory about what happened to Hitler.”

Weschler adds, “No one believed the Russians’ story of Hitler’s suicide in the bunker. As early as the summer of 1945, there were headlines asking, ‘Where is Hitler?’ all over the world.”

Recently declassified FBI documents were the push to Shalev and Weschler to begin their film. They long believed that British intelligence officer and historian Hugh Trevor-Roper’s investigation into Hitler’s death was “unprofessional,” because Russian troops did not allow access to many forensic investigators.

“In those days, the FBI, not the CIA, was responsible for South America,” says Weschler. “And in declassified documents, we see that the FBI took very seriously the possibility that Hitler fled to Argentina.”

In fact, the FBI was so convinced of this possibility that they set up a special unit to investigate. Shalev and Weschler believe they can determine Hitler’s exact whereabouts after WWII. Italian journalist Patrick Burnside wrote a book entitled Hitler’s Escape about the dictator’s journey, and the pair used it as a guide.

“The Eden Hotel in La Falda, Cordoba [in Argentina] was owned by Ida and Walter Eichhorn, who were close friends of Hitler,” Weschler explains. “Hitler sent them a Mercedes Benz as a gift. It was the first Benz in Argentina.”

According to an FBI letter from September 1945, it was believed the Eichhorns would provide Hitler shelter if he ever needed it. Weschler also claims to have found former hotel employees who say they met Hitler and waited on him after the war.

The most important evidence to Shalev and Weschler comes in the form of DNA testing done on Hitler’s skill fragments in 2009, fragments that were recovered from the Berlin bunker.

“They showed that they couldn’t have been Hitler’s skull because they were from a woman under 40,” Weschler says. “The more you look into it, the less credible the official version becomes, and the more plausible an alternative theory seems.”