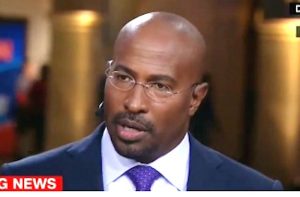 Van Jones was on hand for post-debate commentary as the dust settles, and he was asked for his thoughts about how Trump fielded questions about the disturbing audio tape about him that emerged this weekend. Jones found it “horrible” that Trump decided to minimize his remarks instead of apologizing, and after that, he addressed Trump’s explosive statement about how he’d take measures to put Clinton in jail as president.

“You cannot underestimate the history made in our country. A line was crossed that I don’t know has been crossed in our lifetime,” Jones said. “That is something that I think is a new low in American democracy.”

As the current conversation suggests that Trump had the more energetic showing tonight, Jones decided to float an idea that he admitted would be considered “provocative.”

Jones’ explanation seems to reference the fact that Trump’s recent controversies have cost him several high-profile endorsements. In the past few days, conservatives have wondered whether Trump has any real chance of winning, and even whether he ought to step aside for an eleventh-hour substitute.