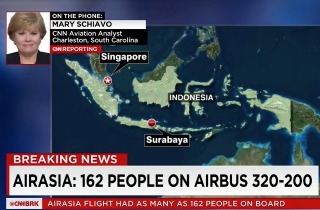 Another plane goes missing halfway across the globe. Families of the 162 passengers on board praying for their safe return, but hope is fleeting. Mystery builds as the cause behind why it went missing without warning brings many of us back to MH-370, which dominated one cable network’s schedule for the better part of two months back in the spring after it went missing, only never to be found.

That network — CNN — saw considerable ratings gains from its initial coverage of MH370 until the tone went from sober to surreal as the hours became harder to fill without any real news to report. And now we’re seeing the opening act around the latest missing plane — AsiaAir Flight QZ8501 out of Indonesia — and it’s much like watching your typical movie sequel: Same formula, similar storyline, and similar hopes we see in Hollywood that the audience will come back for more. Think The Hangover and The Hangover II in terms of mirrored presentation.

Sunday gave us a preview of what to expect until the mystery around the plane’s disappearance is solved: CNN’s State of the Union — which featured interviews with Texas Governor Rick Perry (R) and Sen. Lindsey Graham (R-SC) — was bumped for plane coverage (those interviews can be seen online). Same deal for Fareed Zakaria GPS and Reliable Sources, with Martin Savidge handling GPS and the latter featuring media reporter Brian Stelter anchoring live coverage. The rest of the day basically followed the same marching orders: Plane, plane and more plane.

However, not unlike MH370, there are all those blocks to fill each hour with little in the way of concrete facts to pass along. This is where heavy speculation rears its curious head, as it did early Sunday with this gem from CNN aviation analyst Mary Schiavo when asked if terrorism was involved in the plane’s disappearance:

So taking that analysis at face value, if it happened to rain on 9/11 (a sunny, clear Tuesday along the east coast if you recall), would the 19 hijackers simply aborted a plan years in the making until, say, that Friday when conditions were better? Or was that day chosen because Tuesdays are invariably the slowest air travel day of the week, thereby minimizing the chances of additional passengers disrupting the objective? Note: That’s speculation since that question has never been answered definitively, hence the disclaimer.

Same goes for Ms. Schiavo’s theory on the AsiaAir flight: If you recall, Umar Farouk Abdulmutallab, best known as the “Underwear Bomber,” tried to blow up Detroit-bound airliner on Christmas Day 2009 using a device in his underwear, but the flames were put out by a Northwest flight attendant before it could go off. The weather that day? Cloudy with snow showers. In other words, terror can strike even if the UV Index is high.

So is Schiavo — an aviation expert whose resume doesn’t include anything regarding anti-terrorism — going to walk back her comment on Sunday or at least acknowledge she’s sharing pure speculation outside her jurisdiction of expertise? Nope. It’s all about doubling down these days. To that end, here’s her tweet from Sunday night warning people not to speculate on the plane’s disappearance:

Families of passengers & crew deserve information first. If officials announce the worst for AirAsia 8501, it must be backed by solid info.

Time for somebody to take their own advice, don’t you think?

Another plane goes missing somewhere over the Indian Ocean. CNN goes all-in on coverage. And in the process, one of its experts’ has her own black hole moment.

Until this mystery is solved, expect more speculation, more theories, more patent BS when discussing the fate of 162 people. Credibility be damned.