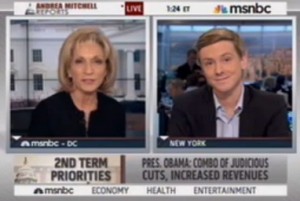 One of the more interesting tidbits from the revamped New Republic‘s two-on-one sitdown between President Obama and TNR editors Chris Hughes and Franklin Foer, was the revelation that the President is a somewhat avid shooting sportsman. Asked, by Foer, if he had ever shot a gun, the President replied “Yes, in fact, up at Camp David, we do skeet shooting all the time.”

In an interview with MSNBC’s Andrea Mitchell Monday afternoon, though, TNR editor Chris Hughes corrected Mitchell when she said that only the President’s guests at Camp David engaged in skeet-shooting, then described President Obama as “a gun owner,” and added that “he shoots himself.”

On Monday afternoon’s Andrea Mitchell Reports, host Andrea Mitchell introduced her segment with Chris Hughes by describing the President’s interview by saying “He also talked about everything from skeet shooting at Camp David by his guests, to how he would feel about letting a son play football, if he had a son.”

Later in the segment, Mitchell brought up the exchange, telling Hughes, “He didn’t say that he was skeet shooting, but he does say that it’s one of the practices at Camp David by his guests,” adding “but that doesn’t mean that we need assault weapons, is basically his point, I guess.”

Hughes corrected her, saying “Franklin Foer, the editor of The New Republic, asked him point blank, ‘Have you ever fired a gun,’ and he said, ‘Yeah, we go skeet shooting all the time up at Camp David, he and his guests, which was news to us, and news to a lot of people.”

He went on to explain that the President “did seem very intent on trying to bridge the divide between gun owners, and those that don’t. It was a telling sign that he says he is a gun owner, and he shoots himself.”

Obviously, Hughes meant to say that the President “is a gun owner, and shoots, himself,” but aside from the amusing inflection, the exchange was odd on several levels. Conservative media watchdog Newsbusters flagged the segment, and accused Andrea Mitchell of “trying to cover for President Obama,” a strange assertion, given that Mitchell’s misreading of the President’s quote completely undercuts the message he was trying to get across. Given that she included that misreading in her intro, and given that it couldn’t have benefited President Obama, it seems like an honest, or second-hand, misreading.

It’s also odd, though, that Hughes, whom Mitchell identifies as “an Obama supporter,” apparently oversells the skeet-shooting, unless the President really did call himself a “gun owner” in an unpublished portion of the interview. A rack of shotguns at Camp David doesn’t make the President a “gun owner” any more than all the guns at all the military bases in America make him a gun owner. The President’s indication that he enjoys a shooting sport is, as Hughes notes, a low-key way of establishing some common ground with gun owners, but let’s not try to make him into Ted Nugent, here.

One of the things the President’s supporters appreciate about him is that, even given the baggage of his “bitter clinging” comments, President Obama never felt the need to butch up with some duck-hunting photo op or tank ride. Even some of his detractors probably appreciated the honesty. Unless the President really did call himself a “gun owner,” this is no time for his supporters to gild the Mossberg.