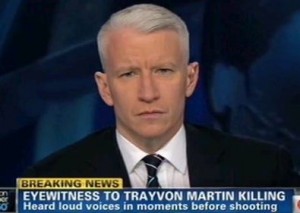 On his show Thursday night, Anderson Cooper spoke to a new witness in the Trayvon Martin case. The witness, whose identity remains anonymous, described seeing “scuffling” and heard a “painful” scream. As many have been saying, the witness also said George Zimmerman seemed unharmed following the shooting.

Cooper asked, “Can you tell me what you saw and what you heard the night Trayvon Martin was killed?”

“It would have to be starting with hearing voices, but not seeing, but after the voices, opening the window, and seeing two men, or two people, on the ground. On top of each other,” he said. Asked what made him pay attention to the voices, the witness continued:

At first I heard the voices with my window closed. And pretty much in that area, people walk their dogs, and you’ll hear people talking, and you can hear them very clearly even when they’re not talking loud. So I thought it was rather loud, but I had just shut my window (because it started raining) … and I thought, oh my gosh who’s out there walking their dog in the rain? And I didn’t look. And then I did something else, and then I heard the loud voices again, and then I thought, well, let me see who that is. And I opened up my window … and it definitely was a very loud, predominant voice. I couldn’t hear the words, but I was like, okay this is not a regular conversation. This is someone aggressively, you know, yelling at someone.

The witness said there was “definitely” a gap of time between hearing the voices the first time and the second time when he opened the window. He observed the following after opening the window:

I saw two men on the ground, on top of each other, obviously thinking, okay something really horrible is happening. And at that point, not looking out the window, I heard a yell for help, and then I heard … another excruciating type of yell. It didn’t even almost sound like ‘help,’ it almost sounded so painful. But I wasn’t watching out the window. […] Next time I looked out the window, there same thing, two men on the grass, on top of each other […] I couldn’t see a lot of movement because it was very dark, but I felt like they were scuffling. And then I heard gunshots, which to me, were more like pops.

After the shot, he said, one man got up. And then he “was walking toward where I was watching, and I could see him a little bit clearer, and I could see that it was a Hispanic man. And he was, um, you know, he didn’t appear hurt, or anything else. He just kind of seemed very […] worried or whatever. […] And another man came out with a flashlight.”

Not a police officer, he specified. He couldn’t say whether the shot went off during the scuffle, but added, “I wouldn’t say it was a lot of movement when I heard the shot.”

Logically, he said, he’d guess Zimmerman was the man on the top, but he could not say for sure since it was dark outside. Both struggles, he said, were in the same location on the grass.