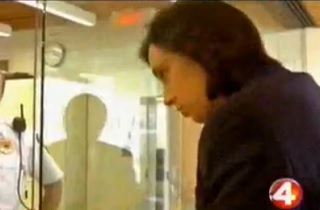 Last week, Fox News reported on a New York State man who was ordered to surrender his firearms, in what the state says was a case of mistaken identity. Opponents of gun regulation point to this case as some sort of nightmare scenario, but for the gun owner in question, that nightmare came to an end Monday. After a court declared the state’s action an error last Thursday, College librarian David Lewis went to the Amherst Police Department on Monday, and picked up the seven firearms he had surrendered.

As it turns out, the state also ordered a second misidentified David Lewis to turn in his guns, even though he didn’t own any guns. The New York State Police say it was the county’s responsibility to verify the information they sent, while the county blames the state. Lewis’ attorney insists there was no case of mistaken identity, but rather a violation of Lewis’ privacy:

Tresmond said in media reports that Lewis did have a temporary, short-term issue and required medication, but nothing recent. He suggested in a radio interview that his client’s private medical history was accessed by the government, violating his rights by using a loophole under HIPAA laws.

So far, there’s no evidence this was anything other than a mistake, and one which was quickly resolved, but that won’t stop the conspiracy-minded from insisting that New York is Big Brother-ing its way through private medical records.

This was, no doubt, an inconvenience for Mr. Lewis, and an unjust one, but take a look at WIVB Buffalo’s report on Lewis’ trip to the police station to pick up his guns:

What you’re seeing here is the police returning seven firearms to a guy whose lawyer admits has been treated with “psychotropic drugs,” after the state quickly determined he wasn’t the guy they thought he was. This would seem to indicate that, while the execution isn’t perfect, New York’s SAFE Act isn’t casting too wide a net, isn’t just scooping up anyone with a script for Xanax. No one went to this guy’s house to get his guns, he surrendered them on his own.

Now picture those seven firearms in the hands of someone who is a danger to himself or others, or in the hands of violent felons, or domestic abusers. Picture them in the hands of a thousand such people. Now double that. The State of California has been conducting such seizures for years now, and confiscated over 2,000 firearms last year, with only 33 agents. Even those “confiscations” are essentially voluntary, since the California Department of Justice agents don’t use search warrants, and can’t enter subjects’ homes without permission. Those 2,000 confiscations, by the way, are out of about 40,000 weapons believed to be in the hands of California’s prohibited firearms owners. Paperwork snafus aside, New York should be doing more of this, not less.