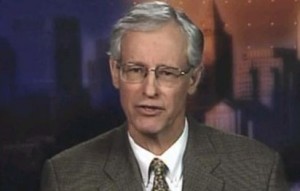 New York Times public editor Arthur Brisbane got some unexpected public criticism when he wrote a column asking if journalists should be “truth vigilantes,” calling out politicians who make blatant distortions. Since many people think this is the dictionary definition of journalism, Brisbane was roundly mocked for even asking the question. On CNN’s Reliable Sources, Brisbane defended his piece to Howard Kurtz and why he even questioned the responsibility of the press.

Kurtz recapped the public response to Brisbane’s column as “Yes, you moron!” and asked him if he had any regrets about writing the piece. Brisbane admitted he could have made his wording a little clearer, but insisted that his piece fueled “a lot of good discussion” on the role of the press even if he ended up being a “piñata.” Kurtz thought that critics were misrepresenting Brisbane’s argument by suggesting he thought journalists should just be stenographers for politicians and public figures, but admitted that was the media narrative that has emerged.

Brisbane thought he was treated unfairly as a result of his post, because all he wanted to do was “ask a question,” but people started to make all sorts of assumptions about what he believes. He claimed his initial column was not about the simple act of fact-checking, which should be the job of any journalist, but to call out someone who blatantly lies and distorts factual information.

Both Brisbane and Kurtz differentiated between simple fact-checking and active challenging of what public officials say. Brisbane worried that journalists might become “argumentative” and make statements that are “largely subjective,” and the danger there is that it would damage the credibility of a straight news reporter.