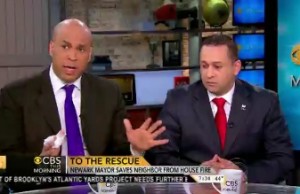 Newark Mayor Cory Booker added some luster to his already-glowing image last night when he fought through his security detail to rescue a woman from a house fire Thursday night. After pulling his next-door neighbor from a second-floor bedroom and carrying her through the flames to safety, Mayor Booker was treated for smoke inhalation and 2nd degree burns. He appeared on CBS News This Morning to tell the harrowing tale.

Mayor Booker and members of his security detail were returning from an interview with News 12 New Jersey Thursday night when they discovered the building on fire. Co-anchor Gayle King jokingly scolded Mayor Booker for disregarding his own safety, but true to form, Booker’s first impulse was to credit members of his security detail who noticed the fire, and evacuated most of the residents. “Detectives Santos, Duran, these guys were incredible,” he said. “Got everybody out of the house. When I arrived, they were pulling the last people out, and the mother was complaining, screaming, her daughter was still up there.”

Det. Alex Rodriguez, a member of the Mayor’s security detail, didn’t want to let him go in, but he sya the Mayor “basically told me, ‘This woman is going to die if we don’t help her,’ and I let him go and without thinking twice, he just ran into the flames and rescued this young lady.”

The Mayor described the “terrifying” rescue, confessing that once he pushed past Rodriquez and through the flames, he had “religious thoughts.”

“When I got there and couldn’t find her in all the smoke,” Mayor Booker said, “looked behind me and saw the kitchen erupting with flames all over the ceiling, that’s when I had clear thoughts. ‘I’m not going to get out of this place alive.’ As I told gayle, very religious. Thankfully she started yelling out to me and I was able to find her through all the smoke.”

Following the rescue, the famously Twitter-literate (or “Twitterate™”) Mayor tweeted his followers “Thanks 2 all who are concerned. Just suffering smoke inhalation. We got the woman out of the house. We are both off to hospital. I will b ok,” and later, “Thanks everyone, my injuries were relatively minor. Thanks to Det. Alex Rodriguez who helped get all of the people out of the house.”

I wonder what Mayor Booker would have thought if he had remembered, while he was in that burning house, this unintentionally ominous last tweet before the fire, as he prepared for that interview with News 12 New Jersey:

Here’s the interview, from CBS News This Morning: