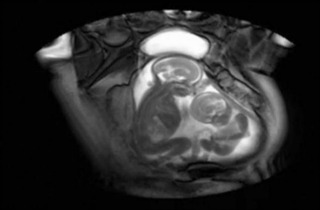 A new video out of London’s Center for Fetal Care shows twins fighting. Not that interesting? Well, it gets better because these twins haven’t even been born yet: an MRI scan shows the beginnings of sibling rivalry taking place within the womb.

This advanced MRI scan is usually used to study twin-to-twin transfusion sydrome, or TTTS, where one twin takes blood from the other. It’s only been recently developed and doctors say it could be a great new tool for studying twin interactions inside the womb. Dr. Marisa Taylor-Clark of the London Center believes the benefits are extraordinary,

“We haven’t really been able to see before, in such real-time, complete pictures, how twins interact. What this lets us do is see their positions in relation to each other and how much space they occupy, and how they might move around and push each other out of the way, so that’s something that you can snapshots of on ultrasound, and small parts of it, but you don’t get the view of the whole room, as it were, the room being the womb.”

The scan uses a technique called “oversampling”, which Dr. Taylor-Clark says is much more detailed than conventional MRI scans:

“What we do differently is, much thinner slices of the brain. So the pictures that we take are of much, much thinner – just a couple of millimeter- thickness regions and we overlap them, so that means that even if the baby moves, we’ve oversampled the brain, so when we come back to looking at them if we want to reconstruct a 3-D volume of the brain, we’ve got extra data, which means we’re not missing out any key regions.”

Fetal MRI’s can pick up indications of brain injury much earlier than ultrasounds can, but Dr. Taylor-Clark still does not recommend the new scan for the vast majority of pregnant women:

“I think MRI scanning is a very specialized technique and the vast majority of women have healthy pregnancies without any problems and deliver well healthy babies. If we were to scan all pregnant women, we would pick up a very small number of abnormalities and potentially pick up something that we didn’t quote know how to interpret that might be quite stressful for some mothers.”

Watch the full clip, below via Reuters: