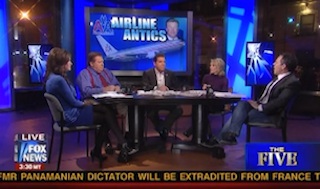 That appeared to be the gist of a segment today on The Five. Any frequent viewer of the show could have guessed that any report they would do on Alec Baldwin getting removed from an airplane was going to be little more than insults. However, this thing seemed to get away from them and turn pretty childish pretty quickly.

Look, we get it. Conservatives don’t like Alec Baldwin. And, yes, he appears to have acted like a right ass. But do we really need to spend five whole minutes (literally!) on what is little more than a celebrity gossip story?

If I had to pinpoint the exact moment when this segment jumped the shark, I’d go with the part where they start accusing Baldwin of being prejudiced against Catholics.

Seriously? Did no one on the show decide to check out the actor’s bio and find out that he was, y’know, raised Roman Catholic? No? No one did?

Don’t worry though. Just when viewers might have feared that they were stuck in some kind of time loop and the Baldwin talk would never end, they moved on to other pressing matters: the fact that Michael Moore has crappy fashion sense and Mika Brzezinski is a jerk on a channel no one watches. Informative stuff.

We understand this is an opinion-based show that needs to come up with content every day, but can we not fully convert into middle school-aged mean girls? It’s not particularly entertaining.

Of course, you can take my opinion with a grain of salt. After all, I’m probably just racist against people who work in the media.