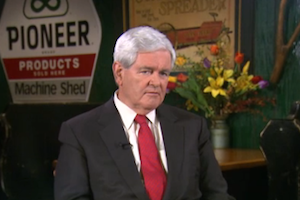 Potential Presidential candidate Newt Gingrich recently gave an interview with CBN’s David Brody. In the conversation, posted online yesterday, Gingrich was asked about the things in his past (for example, his multiple marriages) that might give pause to deeply religious voters. Gingrich responded with a passionate speech about the forgiveness of the Lord. However, something at the beginning of his response has caused a few raised eyebrows as it appears he partially blames his past indiscretions on the fact he loves America so gosh darn much.

The question from Brody was how God’s forgiveness relates to the “personal issues” from Gingrich’s past. This was what Gingrich said:

“There’s no question at times of my life, partially driven by how passionately I felt about this country, that I worked far too hard and things happened in my life that were not appropriate. And what I can tell you is that when I did things that were wrong, I wasn’t trapped in situation ethics, I was doing things that were wrong, and yet, I was doing them. I found that I felt compelled to seek God’s forgiveness. Not God’s understanding, but God’s forgiveness. I do believe in a forgiving God. And I think most people, deep down in their hearts hope there’s a forgiving God. Somebody once said that when we’re young, we seek justice, but as we get older, we seek mercy. There’s something to that, I think. I feel that I’m now 67 I’m a grandfather. I have two wonderful grandchildren. I have two wonderful daughters and two great sons in law. Callista and I have a great marriage. I think that I’ve learned an immense amount. And I do feel, in that sense, that God has given me, has blessed me with an opportunity as a person. Forget about all this political stuff. As a person, I’ve had the opportunity to have a wonderful life, to find myself now, truly enjoying the depths of my life in ways that I never dreamed it was possible to have a life that was that nice.”

I’m not going to get into a theological discussion about whether or not I believe in God. I do, however, believe in women. And, out of all the ladies I’ve met, I have never met a single one that would accept “I love America” as an excuse for me doing anything “inappropriate.” I don’t know. Maybe if I set off too many fireworks on the Fourth of July that reasoning would fly, but that’s about it.

(h/t Outside the Beltway)

Check out the video from CBN below: