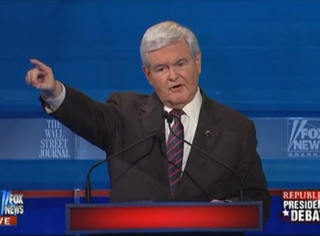 Newt Gingrich has said several things on the campaign trail that raised eyebrows from a race perspective: his idea to turn young children into janitors, for example, or calling President Obama “the food stamp president.” It all came back at him tonight via Juan Williams, who asked, repeatedly, whether Gingrich saw the comments as “insulting” or whether he understood why it sounded like “you’re belittling people.” Gingrich’s short answer? “No.”

Williams listed several of Gingrich’s comments first about inner-city children and the lack of work role models they have in their lives, and his idea to give them jobs at young ages to teach them responsibility. “Can’t you see this is viewed at a minimum insulting to all Americans, but as particularly to African Americans?” “No, I don’t see that,” Gingrich replied, giving an anecdote of his daughter doing janitorial work as her first job, and another individual who worked in the donut industry. “Only the elites despise earning money,” he responded with a flourish.

Williams then turned and reasked the question somewhat more harshly: “My Twitter has been inundated with people of all races asking if your comments are not intended to belittle the poor,” he began, to boos from the crowd. Williams noted that he was asked by someone at a black church in South Carolina why he called President Obama a “food stamp president”: “it sounds as if you are seeking to belittle people.”

“The fact is that more people have been put on food stamps under Barack Obama than any other president in history,” Gingrich replied, adding that he believed that Americans had a right to “pursue happiness” and did mind that liberals disagreed, and “I will continue to find ways to help poor people find a job, get a job, and learn someday to own the job.”