Newt Gingrich On Obama's Energy Policy: 'You Cannot Put A Gun Rack In A Volt' 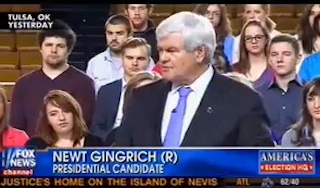 “The President has said, you know, you ought to buy smaller cars,” Gingrich quipped. “Now, let me start with a simple premise that most Oklahomans will understand: You cannot put a gun rack in a Volt!”

The anchors on Fox and Friends, after playing the clip, followed up on Gingrich’s assertion.

“You can’t put a trailer hitch on it either, I would imagine, to pull something really big,” host Steve Doocy observed.

“I drove a Volt for about a week or so,” Bolling acknowledged. “I think you might be able to put a gun rack in the Volt and maybe even hitch something to the Volt. You won’t be able to drive too far with the electric power.”

“What about a trailer hitch?” Doocy quizzed.

“Maybe?” Bolling hesitated, then concluded, “No, because it switches from electric power to gasoline.”

“It happens quicker if you turn the heat on, as I found out!” Bolling exclaimed. “I’m not kidding.”

“What about the dome light?” Doocy joked.

“Can I just make this clear? It’s a great car,” Bolling acknowledged. “I loved it when I was on gasoline. I just couldn’t deal with it when it was on power. That’s all. GM, doing a good job. Just get that battery better, will ya?”