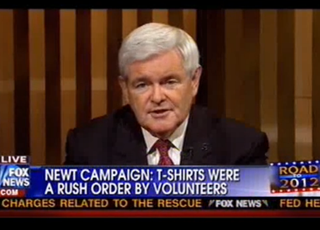 Van Susteren brought up the topic gingerly and gave Gingrich some time to explain why his campaign merchandise was made outside of America. He denied it vehemently. “In my case, it was bologna,” he said, explaining that his t-shirts were actually made in Atlanta, calling the reporting faulty and asserting that he would, in fact, use only American products. That said, he did not think the topic was worthy of discussion. When asked whether he believed it was a “legitimate concern,” Gingrich replied angrily that “for any of our major networks to engage in gotcha junk reporting instead of figuring it out,” given the economy and bigger issues, was illegitimate.

Van Susteren disagreed, explaining that she did not “think it was junk” because when candidates call for Americans to buy domestic products and help spur the economy, they should be held up to their own standard. Gingrich noted that the latter claim that Americans should buy domestic products wasn’t even a universal opinion among Republicans. “In Ron Paul’s case,” he argued, “he’s for the world market.”