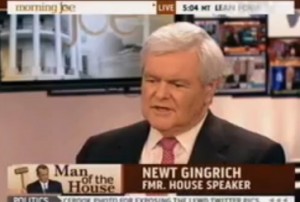 On Friday morning’s Morning Joe, former House Speaker and failed Republican presidential candidate Newt Gingrich had one of those broken clock moments when he tried to warn congressional Republicans against holding the nation’s credit rating hostage again. Discussing current House Speaker John Boehner‘s tumultuous reelection to that post, host Joe Scarborough asked what Boehner should do now, and Gingrich volunteered that the debt ceiling threat is “a dead loser.”

Following several 11th hour revolts on the fiscal cliff deal, Speaker John Boehner was hit with several protest votes on the way to his reelection as top House leader. Scarborough asked Gingrich, “What’s he do? Because he can’t be punitive towards these people that you would want to be punitive towards, obviously, because he knows his speakership is hanging by a thread.”

“But he also knows — they’ve got to find, in the house, a totally new strategy,” Gingrich began. “Confronting — for example, everybody’s now talking about, okay, now comes the debt ceiling. I think that’s, frankly, a dead loser.”

Gingrich explained that “in the end… the whole national financial system is going to come into Washington by television and say ‘Oh, my god, this will be a gigantic heart attack. The entire economy of the world will collapse. You guys can’t be responsible,’ and they’ll cave.”

The last time Republicans threatened to force a U.S. government default by refusing to raise the debt ceiling, which allows the government to pay out money that congress has already spent, the result was the first credit rating downgrade in U.S. history. Another such debacle would be disastrous, but Republicans see this threat as fair game to extract political concessions.

Setting aside my outrage at Gingrich’s insensitivity toward Cardio-Americans, what Gingrich said makes perfect sense, a lot more sense than child janitors, and even though there’s an excellent chance that those congressional Republicans were watching Gingrich this morning, there’s also little chance they’ll heed the former Speaker. Like the most hopeless drug addict, Republicans won’t be able to help themselves. It’s going to take more than Newt Gingrich’s annual moment of clarity to change that.