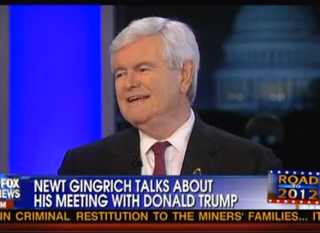 Newt Gingrich has come out as one of the most vocal supporters of the proposed Newsmax debate moderated by Donald Trump, and one of the loudest pro-Trump voices generally among the Presidential candidates. As they have declined to participate en masse– first Jon Huntsman, then Rep. Ron Paul, then Mitt Romney— Gingrich addressed their decisions tonight, telling Greta Van Susteren that he didn’t “know why anyone would do that,” and suggesting it exposed a certain weakness in candidates to decline a debate.

Van Susteren and Gingrich discussed Trump himself, as well the controversy around him. Gingrich had nothing but good words for Trump– that he was “such a character” who brings an “excitement and zest that is interesting.” He admitted he “can’t imagine what [the debate] would be like,” though suggested something like an “Apprentice presidency.” “To have something that just sort of breaks out,” he admitted, however, “is good.” “Having Donald Trump in that kind of environment,” he concluded, “will actually be amazing.”

RELATED: Glenn Beck Confronts Newt Gingrich, A Candidate With Whom He Has ‘Serious Concerns’

Van Susteren then concluded by asking what Gingrich thought of other candidates that had avoided Trump. “I don’t understand it,” he responded. “I’ve gotten to where I am right now in part because of debates.” He added that being “afraid” of Donald Trump didn’t inspire confidence: “you want me to believe you can debate Barack Obama, but you won’t debate Donald Trump?”