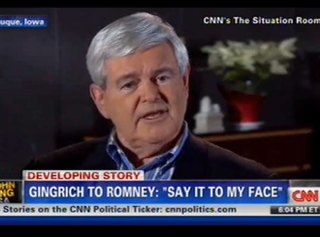 Newt Gingrich stopped short of calling Mitt Romney a coward for not agreeing to a one-on-one, unmoderated debate today during his talk with Wolf Blitzer. Responding to Romney joking that Gingrich’s Virginia ballot gaffe was more “Lucille Ball at the chocolate factory” than Pearl Harbor, he demanded one-on-one time with the candidate. “Be man enough to own it,” he challenged.

RELATED: And Now, Romney Weighs In With A Newt/Virginia Analogy: ‘Lucille Ball At The Chocolate Factory’

“I’ll meet him anywhere in Iowa, for 90 minutes, just the two of us, in a debate, with a timekeeper and no moderator,” Gingrich told Blitzer after being shown the clip of Romney mocking him. “I’d like for him to have the courage to back his negative ads,” Gingrich continued, adding that he could not prove that he could beat President Obama at a debate without going through Gingrich. Blitzer noted that Romney had debate Gingrich, and “he was standing during those debates rather close to you.” That wasn’t enough for Gingrich, however, given the recent negative campaign. “If you want to run a negative campaign and want to attack people, at least be man enough to own it,” he replied.

On tonight’s John King USA, host Jessica Yellin asked Romney campaign strategist Russ Schriefer for a response, and he diagnosed Gingrich’s bravado as a response to his own campaign this week. “The was sort of a drive-by shooting,” he quipped, from “Happy Warrior Newt Gingrich, who is really lashing out because he has had a really bad week.”

The interview and Romney campaign reaction via CNN below: