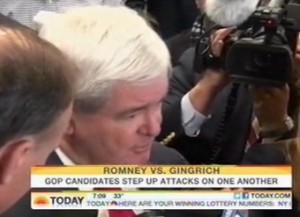 The Republican primary race is the gift that just keeps on giving…to the effort to reelect President Obama. As the Iowa caucuses approach, the President’s potential general election opponents are doing the heavy lifting for pro-Obama PACS like American Bridge and Priorities USA. On Monday, former House Speaker and current frontrunner Newt Gingrich capitalized on second banana Mitt Romney‘s $10,000 bet at Saturday night’s debate, telling reporters he would bet $10 that Romney doesn’t want to discuss the people his Bain Capital threw out of work.

At Saturday night’s Republican debate, the most highly-rated one yet, former Massachusetts Gov. Mitt Romney committed a gaffe that fed into his image as an out-of-touch zillionaire when he casually offered to bet rival Rick Perry $10,000 that he had never supported a national individual health insurance mandate (in fact, both he and Gingrich have).

On Monday, Gingrich cannily tied that terrible optic to a consistent Democratic attack on Romney, that his vaunted business experience consists of enriching himself at the expense of workers at the companies his firm bought. Reporters asked Gingrich for his reaction to Romney’s suggestion that Gingrich return the money he had received from Freddie Mac. “If Governor Romney would like to give back all the money he’s earned from bankrupting companies and laying off employees over his years, then I would be glad to then listen to him,” Gingrich replied, then added the kicker. “I’ll bet you $10, not $10,000, that he won’t take the offer.”

Newt’s rejoinder loses some of its effectiveness when you realize that his counter-offer makes him not just an out-of-touch zillionaire, but a cheap out-of-touch zillionaire. Still, money can’t buy the kind of mileage the anti-Romney PACs will get out of Newt’s soundbyte, and Romney’s response. While the official Obama reelection campaign has taken it relatively easy on Romney thus far, pro-Obama PACs like American Bridge and Priorities USA have been going at the former Governor like a pack of starved junkyard dogs, so it won’t be long before Gingrich’s slam shows up in one of their ads.

In the interest of staying ahead of the curve, I’m going to go ahead and report that future news now. On (date in near future), pro-Obama PAC (enter name here) released a devastating ad against former Massachusetts Gov. Mitt Romney, featuring this quote from Newt Gingrich: