Newt Gingrich Declares To ABC’s Jake Tapper: ‘I’m Going To Be The Nominee’ 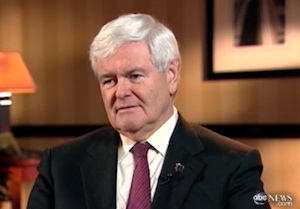 Republican frontrunner Newt Gingrich audaciously declared in an interview with ABC News’s Jake Tapper that he would end up winning the Republican nomination. “I’m going to be the nominee. It’s very hard not to look at the recent polls and think that the odds are very high I’m going to be the nominee,” Gingrich affirmed. “And by the way, I don’t object if people want to attack me, that’s their right. All I’m suggesting that it’s not going to be very effective and that people are going to get sick of it very fast. And the guys who attacked each other in the debates up to now, every single one of them have lost ground by attacking. So they should do what they and their consultants want to do. I will focus on being substantive and I will focus on Barack Obama.”

RELATED: Newt Gingrich: GOP Primary May Turn Out To Be Newt Vs. Not Newt

Gingrich’s claim that the odds are very high he is going to be the nominee checks out. Here are his current InTrade betting odds versus Romney:

Watch Gingrich’s bold declaration that he is going to be the Republican nominee below via ABC: