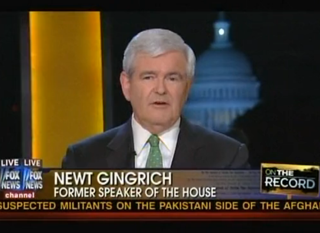 After suffering a mass exodus of senior staffers last week, rumors began to circulate that Newt Gingrich‘s campaign had been seriously derailed by his wife, Callista. On tonight’s On the Record, Gingrich got a chance to comment on those rumors and condemned these reports, especially from NBC, and demanded an apology on behalf of his wife. He also took the opportunity to note that many of his former staffers had “failed totally” and were on the way out anyway.

Asked by Greta van Susteren to comment on the rumors that his wife had made the campaign impossible to run, the former House Speaker thanked van Susteren for the opportunity and gave an abridged version of her biography– her writings, filmmaking, and the various projects they have worked on together. “I say that as background,” he explained, “because I saw on NBC this morning in a program that had no one on camera.” He went on to condemn the “cowardly people that lied about my wife” and demand an apology from the network, adding that the report was “personally reprehensible” and “the kind of thing that makes it hard to make decent people run for office.”

Gingrich then went on to compare his relationship to Nancy and Ronald Reagan and argue that some of his former staff “had no idea how to deal with a couple who work together.” What’s more, he called the anonymous sources “backstabbers” and noted that those that had disagreements with him on how to run the campaign wanted to run a “1952 campaign that I thought was hopeless and couldn’t possibly win.”