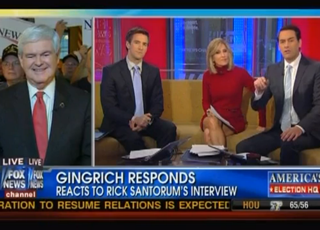 Former Fox News contributor Newt Gingrich wasn’t very happy with Fox News this morning. The Republican frontrunner in the 2012 campaign visited the weekend crew of Fox & Friends to chat about debate dynamics and ended up challenging the network’s “fair and balanced” logo over a question on Mitt Romney‘s taxes. Has Gingrich taken this whole hate-the-media thing a step to far by attack, of all people, Fox & Friends hosts?

RELATED: What If Newt Gingrich Was Just In An Open Marriage And Admitted It? Would That Be Such A Bad Thing?

The interview started out well enough, with Gingrich being asked by host Alisyn Camerota to confront claims from Rick Santorum that he could not be a “Reagan conservative” and support the individual mandate. “It verges on silly,” he replied. This was challenged by host Dave Briggs, who reminded Gingrich that it isn’t silly that he supported a universal mandate– it’s just true– and that he did promote climate change awareness. “Wait a minute– what you just said is wrong,” Gingrich replied. “I said we ought to be concerned about climate change, [but] I opposed Cap and Trade.” Gingrich continued to note several supposedly liberal stances Santorum took while senator from Pennsylvania, and noted he considered himself to have legitimate stances. “It’s all baloney,” he concluded.

Host Clayton Morris then jumped in to ask about Romney’s attacks. Morris explained that now Romney was demanding a release of Gingrich’s ethics report from when he left Congress, perhaps after some “stammering” on his taxes, which elicited a loud cackle from the former Speaker. “Don’t you sort of admire the arrogance and dishonesty of the Romney campaign?” Noting that Romney “can’t even answer coherently in the debate” about his taxes, he explained that the report is on his website open to read, as well as his taxes.

He then took a sharp turn to attack the hosts, offended that he had been asked to “take seriously” Romney’s demand. “Even in the news media, you ought to have some sense of balance. As a reporter, don’t you have some sense of balance? Isn’t ‘fair and balanced’ part of Fox News?” Briggs jumped in to defend Morris’s question, explaining that he was giving Gingrich a chance to respond, not legitimizing any claims. He also expanded the question to propose that it was up in the air whether “any of this mattered. Gingrich responded that “if there is something wrong, we deserve to know” with Romney’s taxes only because of the “billion dollar Obama campaign” that would crush him if there was something wrong there– as opposed to Gingrich’s ethics investigation, which had “been covered for 20 years; it’s all out in the open.”

So why did Gingrich blow up at Morris’s question? It felt, at least on Gingrich’s part, somewhat forced, as if he was waiting for any opportunity to bash them. And that wouldn’t be surprising in light of some peripheral evidence that not all the Fox & Friends hosts were 100% on his side during that testy exchange with CNN’s John King— particularly Briggs, who tweeted his support of King (and Fox’s Neil Cavuto in defending him) that his question about Gingrich’s affair with his now-wife Callista was “fair game” (the twist to this is that Morris, who actually got clawed here, seemed fine with Gingrich’s reaction to King’s question while it happened on Thursday). Either that, or Gingrich had a bullet in his barrel for the media today that was ready to land no matter where, since the strategy is clearly working, and the Romney tax issue felt like the right moment to strike.

One thing is certain: when Gingrich first started his crusade against the media, claiming with a straight face that “any ad which quotes what I said is a falsehood,” the media (and the few voters who were listening at the time) laughed him off as an embarrassing relic of the 90s: the Republicans dirty acid-wash and plaid flannel laundry, somehow being hung out to dry so many years later. Gingrich hasn’t changed his strategy, but the audience paying attention has– and they are blinded by their own distaste for the media so much, that they’d rather watch Gingrich make heads explode by accusing them of anything and everything than demand of Gingrich some sort of consistency– or a message beyond attacking the people who give him free publicity by putting him on their shows.

The exchange via Fox News below: