The reaction was not what he was expecting: 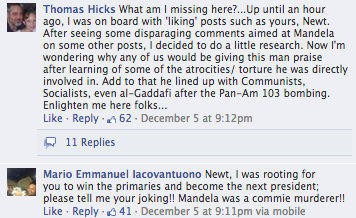 Gingrich responded on CNN’s State of the Union Sunday morning.

“What would you have done?” Gingrich asked, noting that Mandela opposed, both politically and personally, what was effectively “a police state.” “After 27 years in prison, he doesn’t come out bitter. He doesn’t come out angry. He comes out as an extraordinarily wise man who actually invites his prison guard to sit in the front row at his inauguration as president.”

“I think some people bought a rationale that defined everybody who was in any way in rebellion against the established system in the third world as anti-American,” Gingrich said. “There are people who have sustained this kind of mythology. There’s no question that in the ’50s Mandela moved from a nonviolent model toward being allied with the Communists. My point to conservatives is: there weren’t any conservative allies. Churchill allied with Stalin in World War II. I think in a similar tradition, Mandela was desperate by that stage, he saw the scale of the oppression, and the only allies that were available, frankly, were on the hard left.”