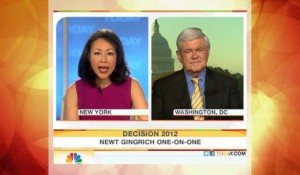 Newt Gingrich appeared on the Today show Monday morning to discuss Herman Cain‘s candidacy and the swirling sexual harassment accusations levied against the former Godfather’s Pizza CEO. But the “one-on-one” interview turned into a wonderful piece of media bashing by Gingrich, who, apparently, didn’t feel like being baited into answering the typical, “How will you defeat Barack Obama?” line of questioning. When Ann Curry asked if unanswered questions about the allegations against Cain would hurt him as a nominee, Gingrich took control of the interview and blasted the media for blowing the stories out of proportion:

“What does it mean to the elite news media that nobody in the country ever walks up to us and raises questions you all raise? Herman Cain, I suspect, is getting far fewer questions from citizens about these kind of things than he is about jobs, about other things, and I just think there’s a huge gap between the gossip that fascinates political reporters and the average person’s concern about the price of housing, the availability of jobs, solving the budget deficit without crushing the middle class. A lot of things that, frankly, the substance level are dramatically more important to most Americans.”

When pressed by Curry on whether or not character matters in choosing a presidential candidate, Gingrich said it did, but explained that the interest in these gosspiy stories has raged out of control — to a level where it might become detrimental to the news media as a whole:

“When the news media goes and finds an anonymous report about an anonymous incident, about which you have remarkably limited information, and you decide that matters more than every other issue in the campaign–that may put your judgment in doubt…being the institutional news media.”

Watch the clip of the interview below, courtesy of Today: