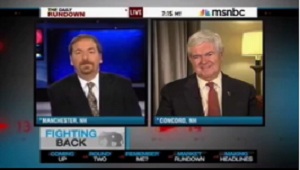 In an interview with The Daily Rundown‘s Chuck Todd, besieged GOP presidential candidate Newt Gingrich was asked if the Citizens United Supreme Court decision had enabled the relentless barrage of attacks from Mitt Romney. Gingrich replied that he wasn’t a victim of the case that allows unlimited donations to SuperPACs, but rather of “a bunch of millionaires getting together to run a negative campaign.”

Gingrich has made Romney’s negative SuperPAC ads a major focus of his campaign, even coining the term “Romney-boating.”

“Back in April,” Todd said, “you had said the Citizens United case and the work that David Bossie did there is an extraordinarily important case and landmark. Obviously you were the victim of, one would argue, the unintended consequences of Citizens United. Any second thoughts?”

“No, I’m not the victim of that,” Gingrich replied.  “I’m the victim of one personal person, Mitt Romney, whose staff decided to run a deliberately negative and dishonest campaign,” adding that “this particular approach, I think, has nothing to do with the Citizens United case, it has to do with a bunch of millionaires getting together to run a negative campaign, and Governor Romney refusing to call them off.”

That’s a bit like Sonny Corleone saying he’s not a victim of gunshot wounds, but rather, a bunch of bullets that decided to get together to run a negative campaign against his bodily tissue. His response reminded me strongly of the hilarious (extremely NSFW) Mr. Show sketch in which heavy metal band Wyckyd Sceptre is revolted by homosexuality and gay sex, even though they continually videotape themselves performing gay sex acts on each other. That’s what Citizens United is, Newt. A bunch of millionaires getting together to run a negative campaign.