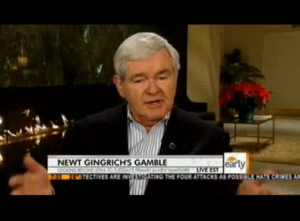 As Iowa continues to drive everyone out of his or her everloving mind today, former House Speaker Newt Gingrich has dug his claws into rival candidate Mitt Romney. The gloves are off, and the hair would be flying if it wasn’t all so perfectly molded in place.

When asked by CBS’ Early Show whether his recent comments “scolding” Romney “and his friends” for their involvement in a super PAC indicate that the former Speaker believes Romney is a liar. Gingrich’s reply was simple and to the point: “Yes.”

RELATED: Newt Gingrich On Romney Super PAC Ads: ‘Give Us A Break, Mitt, Just Be Honest!’

Well, you seem shocked by it. Yes. I mean, what else could you say? This is a man whose staff created the PAC, his millionaire friends fund the PAC, he pretends he has nothing to do with the PAC. It’s baloney. He’s not telling the American people the truth. It’s just like his pretense that he’s a conservative. Here’s a Massachusetts moderate who has tax-paid abortions in RomneyCare, who has Planned Parenthood in RomneyCare, raises hundreds of millions of dollars of taxes on businesses, appoints liberal judges to appease Democrats, and wants the rest of to believe somehow he’s magically a conservative.

I just think he ought to be honest to the American people and try to win as the real Mitt Romney, not try to invent a poll-driven, consultant-guided version that goes around with talking points.

“Do you really want a Massachusetts moderate” to run against President Barack Obama, Gingrich asked, noting that, as he sees it, Romney would be “torn apart” by the President.