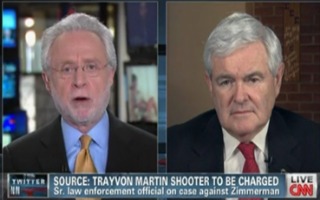 Former House Speaker Newt Gingrich appeared on CNN’s The Situation Room with Wolf Blitzer on Wednesday where he said he believed it was “very dangerous” for the president and the attorney general to weigh in on a pending legal case like the Trayvon Martin shooting.

“My only point was we ought to have equal empathy for every American that gets killed,” Gingrich replied. “This particular case has become sort of a national case where the national media can talk about it, but there are tragic cases around the country involving Americans of every ethnic background and of every age and they deserve some real concern too and some real effort to understand what happened to them and why.”

Blitzer pivoted to the political implications surrounding the Trayvon Martin case and Gingrich’s opinion of how the president and his political appointees have comported himself when speaking out about this pending criminal case. “Is it appropriate, in your opinion, for a president – and today the Attorney General Eric Holder spoke out about this case as well. Is that appropriate,” asked Blitzer.

Gingrich went on to praise the justice system in Florida and the prosecutor, Angela Cory, who he called a “very serious person.” “I’m not a lawyer. She’s handled 50 homicides. I’m inclined to rely on her judgment unless there’s some overwhelming reason by some other expert to second guess her. And since I’m not an expert, I’m not going to second guess her.”