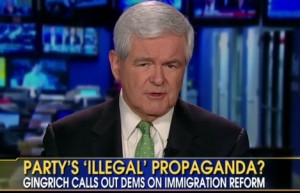 Newt Gingrich appeared on Fox & Friends this morning and demonstrated that he has very specific ideas for addressing many of the nation’s problems, from the economy to immigration. Although generating ideas is Newt’s strength, he’s well aware that some people don’t think you can win a presidential campaign on ideas, and he commented on the departure of many of his senior staff members who had “a fundamental difference about strategy.”

Newt described the difference between his vision for a successful campaign and what the consultants imagined:

And Newt stressed that that the “Newtiny!” (the cleverly titled reference to the incident from the Fox News graphics department) was really no big deal:

“The only person that I really regret losing was, in fact, somebody who had been with us a long time. Everybody else was an outside consultant. All of my core team, the people who have been with me over the last ten years, with the exception of one person, all of them are still here.”

Newt quickly pivoted to promoting his new book on American exceptionalism and discussing his intention of lowering taxes across the board. And finally, returning to a more comfortable subject, Newt blasted President Obama for his “disgraceful comment” where he joked about “shovel ready” projects not being so ready. Newt declared that Americans “should be enraged that the President of the United States, in the middle of the Obama depression, is so insensitive, so uncaring that he doesn’t realize that the failure of his policies is causing pain to millions of human beings in this country.” Even Steve Doocy got in on the “fun,” referencing the “stimulus, that wasn’t very stimulating.”