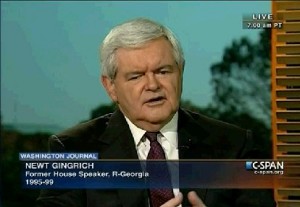 With speculation about Republican candidates for President running wild, likely candidate Newt Gingrich appeared on C-SPAN’s Washington Journal and declared that the Republican candidates for President should organize the terms of the debates and not the news media.  Before one dismisses this as the usual conservative gripe against the “liberal media,” it does consistently seem odd that MSNBC attempts to put Chris Matthews and Keith Olbermann in the position of hosting election night coverage or moderating candidate debates when each host clearly has a liberal perspective.

There’s no possibility that I would ever go to a debate and have Olbermann or Chris Matthews asking questions.  I watched the debate a couple of years ago and it was an embarrassment because they were so relentlessly hostile and they were so left-wing that every question they asked of the Republicans was designed to embarrass and divide the Republicans.  And every question they asked the Democrats was designed to make them look good.  Well why would we participate in that?

What Newt suggests instead is a more serious and substantive debate, possibly even without a moderator, so that the candidates could have more of a conversation and not be limited to “absurd time limits” or have the media focus on gotcha questions.  Well what fun would that be?  Although Newt’s complaint is likely much ado about nothing since Meet the Press host David Gregory would probably now moderate any NBC debate, it still will be fun to see if Matthews or Olbermann have a “hostile” response.

Olbermann did moderate a debate of Democratic presidential candidates in August of 2007, but that does not explain Gingrich’s confused salvo, since it doesn’t appear that Olbermann was ever in a position to try “to embarrass and divide Republicans” as Gingrich stated.

Watch the clip courtesy of C-SPAN below: