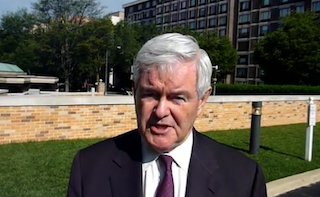 Republican presidential candidate Newt Gingrich released a video on YouTube this morning entitled “I oppose the Obamacare mandate. Period.” As the title suggests, he makes it plain and simple that he completely opposes a “mandate on individuals.” However, some people are pointing out that this seems to go against a stance he held in the past, both in previous years and, well, yesterday on Meet the Press.

Appearing on Meet the Press, Gingrich discussed a number of different topics and made a few comments that he seems to be walking back on. He called Paul Ryan’s budget plan “radical” and “too big a jump,” saying that he didn’t find “right-wing social engineering is any more desirable than left-wing social engineering.” However, a spokesman for his campaign assured The Weekly Standard that Gingrich’s issues with the plan were merely “in design but not substance.”

One comment the candidate made, though, prompted a full YouTube video. On the show, Gingrich explained how he opposed “Obamacare” but host David Gregory played a clip from 1993 in which he enthusiastically supported the idea of an individual mandate that would make health insurance a legal requirement, one of the most controversial elements of the health care law. Gingrich’s present-day response to being shown the clip led some to believe he still held some of those beliefs.

From the Meet the Press transcript:

MR. GREGORY: Now, I know you’ve got big difference with what you call Obamacare. But back in 1993 on this program this is what you said about the individual mandate. Watch.
(Videotape, October 3, 1993)
REP. GINGRICH: I am for people, individuals–exactly like automobile insurance–individuals having health insurance and being required to have health insurance. And I am prepared to vote for a voucher system which will give individuals, on a sliding scale, a government subsidy so we insure that everyone as individuals have health insurance.
(End videotape)
MR. GREGORY: What you advocate there is precisely what President Obama did with his healthcare legislation, is it not?
REP. GINGRICH: No, it’s not precisely what he did.

REP. GINGRICH: Well, I agree that all of us have a responsibility to pay–help pay for health care. And, and I think that there are ways to do it that make most libertarians relatively happy. I’ve said consistently we ought to have some requirement that you either have health insurance or you post a bond…
MR. GREGORY: Mm-hmm.
REP. GINGRICH: …or in some way you indicate you’re going to be held accountable.
MR. GREGORY: But that is the individual mandate, is it not?
REP. GINGRICH: It’s a variation on it.

The YouTube video released today finds no such “variation” gray area on the subject with Gingrich telling the camera that he is “against any effort to impose a federal mandate on anyone because it is fundamentally wrong.”

Below are both the Meet the Press clip and the YouTube video. Decide for yourself if Gingrich has made a 24 hour flip-flop.