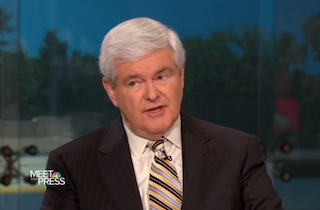 In light of NBA player Jason Collins coming out as gay, David Gregory invited a Meet the Press panel to discuss the gay rights movement. Newt Gingrich was among the panelists — and chose to highlight the “one-sidedness” of the gay rights debate, pointing to the way Catholics are “outlawed” from having adoption services.

The “LGBT community has shown the power of the grassroots to be that additional component to political organizing,” Joy-Ann Reid argued. “You’ve seen the grassroots actually move the debate forward and move society forward.”

From there, Gregory turned to Gingrich, asking him whether a Republican presidential nominee can support gay marriage. “I doubt it,” Gingrich replied.

“This passing reference to religion, we sort of respect religion — sure, as long as you don’t practice it,” Gingrich continued, saying we should go beyond the question of “Are you able to be gay in America?” and ask what it means. Whether that means, for example, eliminating “any institution which does not automatically accept that, and therefore, you’re now going to have a secular state, say, to a wide range of religious groups.”

Rich Lowry then jumped in to question whether the Catholic Church’s objection to contraception is on the same moral level as racial discrimination. “I’m not putting this on a moral level,” she replied. “I’m saying that would you have the right to discriminate based on your religious beliefs?”