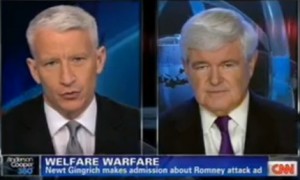 While the political media have been all over a brutal SuperPAC ad attacking Mitt Romney this week, the actual Romney campaign has been pressing a completely false, culturally loaded attack on President Obama, spearheaded by race-chummer Newt Gingrich. On Wednesday night’s Anderson Cooper 360, however, Gingrich admitted that there was “no proof” for the Romney campaign’s claim that “under Obama’s plan, you wouldn’t have to work and wouldn’t have to train for a job. They just send you your welfare check.”

The attack is based on a July 12 memo from the Department of Health and Human Services that grants states flexibility to test new approaches to assistance, but requires them to produce more workforce participation, not less. While various fact-checkers have blasted Romney’s ad, all you have to do is read the memo yourself.

The fact is that the Obama administration hasn’t changed the law one iota, they’ve simply interpreted it to allow greater flexibility for states to test new ideas. Opponents of the policy change say it’s illegal, that section 407  of the Social Security Act (which sets forth the work requirements) is unwaivable, but as you’ll see, HHS isn’t offering waivers to that section:

While the TANF work participation requirements are contained in section 407, section 402(a)(1)(A)(iii) requires that the state plan “[e]nsure that parents and caretakers receiving assistance under the program engage in work activities in accordance with section 407.”  Thus, HHS has authority to waive compliance with this 402 requirement and authorize a state to test approaches and methods other than those set forth in section 407, including definitions of work activities and engagement, specified limitations, verification procedures, and the calculation of participation rates.  As described below, however, HHS will only consider approving waivers relating to the work participation requirements that make changes intended to lead to more effective means of meeting the work goals of TANF.

Enter Newt Gingrich, generous would-be helper of Food Stamp-loving black people, who held a conference call for the Romney campaign this week, and who tried his best to win the Eric Fehrnstrom/Andrea Saul award (the trophy is a golden Etch-a-Sketch with an insurance card drawn on it) for worst campaign surrogate on last night’s AC360.

Host Anderson Cooper did a good job of pressing Gingrich during the interview, getting him to admit that the conservative belief in the states is easily discarded when those states might actually help someone out, but the “money shot” happens right at the end. Earlier in the interview, Gingrich indicated that the ad might have been worded too strongly, and Cooper kept trying to bring him back to that point. He finally succeeded.

“We have no proof today,” Gingrich replied, before revealing that the source of the ad was a dimension, not of sight and sound, but of imagination.

“But I would say under Obama’s ideology,” Gingrich continued, “it’s absolutely true that he would be comfortable sending a lot of people checks for nothing. I believe that totally.”

Yes, obviously Barack Obama is the kind of person Gingrich would believe is satisfied with an arrangement like that.