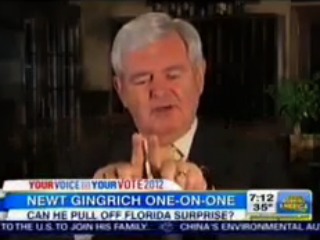 GOP presidential hopeful Newt Gingrich gave an interview to ABC’s Good Morning America, where he told host George Stephanopoulos, where he invoked the words of none other than influential liberal magnate George Soros.

The tension between Mitt Romney and Newt Gingrich has been heating up as the two prepare for the Florida primary, prompting Gingrich to “bring out the big guns” — the fact that George Soros recently shared wouldn’t exactly move to Canada over the idea of a Romney presidency.

“I think Romney’s problem,” Gingrich told Stephanopoulos, “is that the big truth beats the big lie. George Soros in Europe yesterday said publicly in a Reuters interview on video that he’s perfectly happy with either Obama or Romney, that they’re the same people. Minor differences. He said “Gingrich, now, that would be a real change.'”

Romney “can bury me for a very short amount of time with four or five or six times as much money, most raised of it raised on Wall Street from the guys who got bailouts from the government,” Gingrich added. “In the long run, the Republican party is not going to nominate the founder of RomneyCare, a liberal Republican who is pro-abortion, pro-gun control and pro-tax increase. It ain’t gonna happen.”

RELATED: Newt Gingrich Suggests He Did Poorly In Florida Debates Because He Was ‘Amazed’ By Romney’s Lies