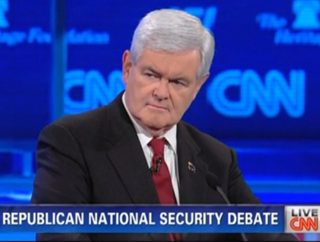 The last time a Republican candidate called for some illegal immigrants to be forgiven their initial trespass into the country in the interest of humanity, they went from frontrunner to punchline. So it was with some element of audacity that Newt Gingrich, the current frontrunner, took up the mantle that destroyed Rick Perry, coming under fire from Mitt Romney and Rep. Michele Bachmann, who argued Gingrich was giving illegal immigrants an incentive to stay.

RELATED: Rep. Ron Paul: I Would Not Aid Israel In Military Action Against Iran

Gingrich elaborated on his immigration policy, noting that he did not believe in full amnesty but in keeping immigrants that were contributing positively to American society, particularly those with math, science and engineering degrees– like Albert Einstein— who were beneficial to the country. He also called for “something like a World War II selective service war that reviews people that are here.” Rep. Bachmann replied that she opposed most legalization, and the DREAM Act on a federal level, and noted comments made by Steve Jobs to President Obama– scientific geniuses were en vogue during this exchange apparently– that he had to move much of Apple’s operation to China because he couldn’t find the engineers to do the work.

Gingrich once again replied that he agreed, but that he would not “break up a family” over immigration. Later in the debate, when attacked by Romney for turning on immigration magnets and supporting policies that “would only encourage more people to do the same thing,” Gingrich doubled down. “I do not believe that the people of the United States are going to take people who have been here a quarter of a century… separate them from their families and expel them, he declared. “I do believe that if you’ve been here recently and have no ties to the us, we should deport you.”

Gingrich concluded that as Republicans, “the party of the family is not going to destroy the family… let’s be humane in enforcing the law.” How these comments different, other than semantically, from Rick Perry’s “you have no heart” comments is difficult to parse– Perry, for his part, didn’t tempt the crowd with any rhetoric of the sort himself tonight. Gingrich didn’t seem to mind the response to his answers, as he stuck by them in a post debate interview with CNN’s Gloria Borger, who noted that it was a good thing to have a “program for legalization without citizenship for people who have been here a long time,” and added that he could not see a situation where people living long-term in America would be kicked out of their communities and churches without those communities protesting.

Gingrich’s exchanges with Bachmann and Romney below, followed by his post-debate comments: