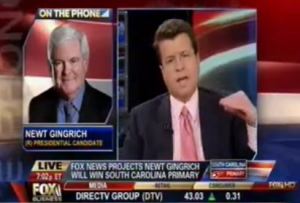 Newt Gingrich called in to Fox Business Network Saturday night, just as Fox News was declaring him the winner of the South Carolina primary. But, because of a poor cell phone connection, the interview eventually devolved into a choppy, garbled mess, with Gingrich even asking Neil Cavuto the infamous, “Can you hear me now?” line.

The highlight of the interview — when the reception was still somewhat decent — came when Cavuto asked Gingrich about his rivals dropping out so the scattered supporters could “coalesce” around one candidate.

“I think people have every right to do what they think is best for their own careers,” Gingrich said. “Folks said I was dead back in June and July. People could have told me to drop out, so it wouldn’t be appropriate… But in the end, sooner or later, it’s going to become Romney versus Gingrich.”

Cavuto then brought up the idea of Mitt Romney possibly upping the attacks, beginning with a cake congratulating Gingrich on the 15 year anniversary of House ethics violations.

“Is it going to get nasty and are you prepared for that?” Cavuto asked, to no reply “We might have lost him…”

“You’re a serious person, you’re on a serious show on Fox –” And then the line went dead.

“Alright, I’m sorry Speaker, it sounded like you were criticizing me anyway, so I’m glad we don’t have it,” Cavuto said, before adding, “I’m kidding.”

Watch a clip of the interview below, courtesy of Fox Business Network: