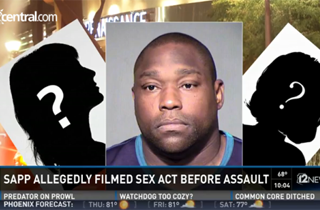 Warren Sapp, the NFL Hall of Famer and TV analyst arrested at the Super Bowl for soliciting prostitutes, apparently did a bunch of really dumb things en route to his arrest, like filming himself having sex with prostitutes.

A police report released by the Arizona Republic reconciled the two accounts given by Sapp, who was slammed with solicitation and two assault charges, and the two women who visited his hotel room. The women, who claimed that they were dancers at a Las Vegas strip club, told police that they were invited to Sapp’s room, where he threw $100 bills at them.

But as the Republic reports, Sapp, who was quickly fired by the NFL Network after his arrest, was kind of dumb about the entire thing and admitted that he paid them to have sex with him:

But investigators say Sapp reported giving each woman $300 in exchange for a sex act. The 23-year-old complied by giving him oral sex, which Sapp recorded on his cellphone and later showed police, while the 34-year-old hid in the bathroom and didn’t emerge until she heard the pair arguing, according to the report.

Sapp told police that the 23-year-old asked for additional money for intercourse and began yelling when he refused to pay her more.

“He told her several times that she needed to leave but she was irate,” the report said. “At one point, she used Warren’s phone to call security to his room.”

The woman said she was collecting her belongings when Sapp grabbed her by the arms and threw her into the hallway, the force of which knocked both women down, according to the report.

“I do what I do, but that doesn’t give him the right to put his hands on me,” the 23-year-old told police.

Watch report below via the Arizona Republic: